The SC Governor’s School for the Arts and Humanities is celebrating the 20th anniversary of the opening of its public residential high school for the arts in Greenville. To kick off a year of celebrations, the school recently held a Founder’s Day Convocation honoring founder and first president Virginia Uldrick, a legend across the state for her work in arts education. 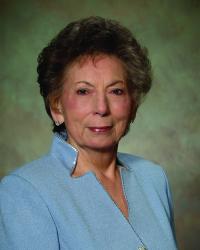 “Her vision was one that we now know to be a model for public education, where the excellence in the arts and academics that she envisioned ultimately places each of our students among the most successful young professionals in the arts and all professions throughout our state and across the nation,” said Governor’s School President Cedric Adderley. He added, “Had it not been for her persistent pursuit of excellence and her vision, so many people would have never had the opportunity to pursue their passion in the arts or pursue the level of a quality education that they so much deserve.” 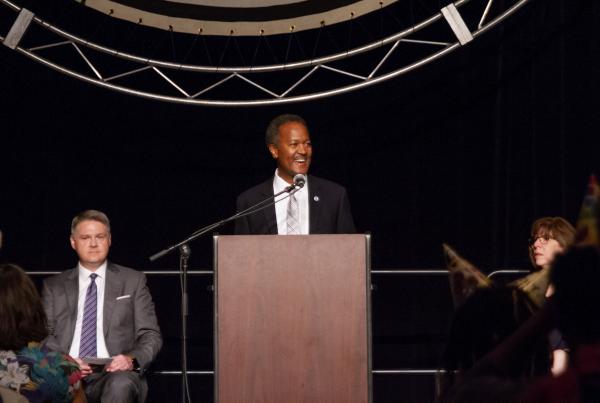 A firm foundation for arts education, bolstered by then-Governor Riley
Prior to the Governor’s School’s residential high school program, Uldrick established a five-week summer program under the school’s former name, the South Carolina Governor’s School for the Arts. This program was signed into legislation in 1980 by the state’s governor at the time, Richard W. Riley, who later became the longest-serving U.S. Secretary of Education. 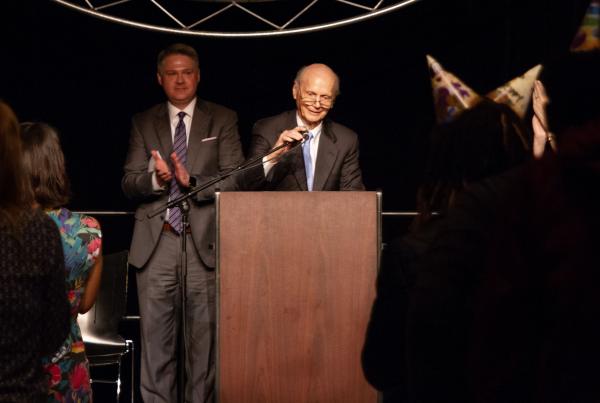 As the keynote speaker of the school’s Founder’s Day Convocation, Riley stated that Uldrick “was an enormous force for good in South Carolina and this country.” He also said, “I’m so proud of the success of the wonderful Governor’s School for the Arts and Humanities,” and encouraged students to “pause a few minutes and think about this unique opportunity that the state of South Carolina is providing for you. Think about the wonderful leadership and talented faculty making possible your quality education and talent.” 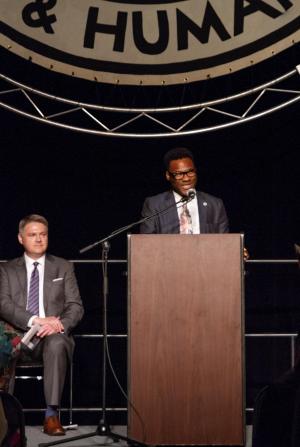 As a testament to the SC Governor’s School for the Arts and Humanities’ early success, cellist Wade Davis, a music student from the inaugural class of 2001, shared his experience during the school’s beginnings and his hopes for the future. “I would like to see the continuation of recruiting only the finest and brightest that South Carolina has to offer the arts community, as well as the unwavering brilliance and support of the faculty and staff, many of whom are still tirelessly devoted to this wonderful school twenty years later,” said Davis.
After graduating from the Governor’s School, Davis earned a master’s degree in baroque cello performance and a graduate performance degree in historical cello from the Peabody Conservatory at Johns Hopkins University. Davis is an active solo and chamber performer in Baltimore and performs with his Early Music group S’amusant. He also teaches at Fort Worthington Elementary/Middle School.

Alumni make an impact on arts education across South Carolina
Davis is one of many Governor’s School alumni who are continuing Uldrick’s legacy by giving back to younger generations through arts advocacy and education. Some of those alums are now educators in South Carolina. Among them are Jim LeBlanc, class of 2003, who is the principal of Saluda River Academy for the Arts; Andre North, class of 2005, who is the Director of Bands at Hanahan Middle School and Assistant Director of Bands at Hanahan High School; Brooke Falk Permenter, class of 2002, who serves on the faculty at the College of Charleston Honors College; John Ott, class of 2009, who is a Gifted and Talented teacher in the Orangeburg Consolidated School District; and Stephanie Cureton, class of 2007, who is the director of English Theatre Arts in Greenville.

Alumni have gained national success in the arts, business, and beyond
Many alumni have made names for themselves in their profession on a national scale, thanks to the elevated level of arts training that Uldrick set the groundwork for and remains the Governor’s School’s standard today. Graduates who are bringing acclaim to South Carolina include Patina Miller, a Tony Award-winning actress from Pageland who has held major roles in television series, films, and on Broadway; Rachel Inman, from Greenville, who is the UX Design Lead for Google Maps; Jonathan Spigner, also from Greenville, is a lead dancer in the Hong Kong Ballet; Jedd Rosche, from Beaufort, is the Senior Congress Editor for CNN Politics; and Maria Fabrizio, from Columbia, whose Wordless News illustrations have been commissioned or published by NPR.com, O Magazine, and the New York Times. 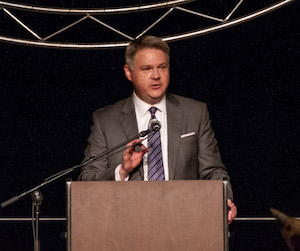 While the Governor’s School honors Uldrick and reflects on how her fierce determination has made a life-changing impact on thousands of students’ lives, the school happily anticipates what’s to come. “As we celebrate our first 20 years, we look forward to the next 20 years and the continued impact this school will have on young artists in South Carolina as they pursue their dreams,” said Chad Prosser, Governor’s School board chair, during the convocation.

An array of 20th-anniversary celebrations
In addition to Founder’s Day Convocation, the SC Governor’s School for the Arts and Humanities, in partnership with the Governor’s School Foundation, has held several events in honor of the 20th anniversary including a solo art exhibition featuring work by founding Visual Arts Department Chair Michael Brodeur, as well as a reception in Rock Hill for alumni, donors, and community members. 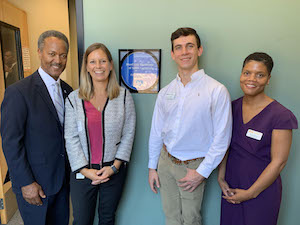 A dedication was held for the updated campus fitness center to honor BlueCross BlueShield of South Carolina, which supported impactful upgrades to equipment that will support the health and wellness of students.

A new music building and more
This fall, celebrations will continue with a series of events that include the grand opening of a new 10,000 square foot music building that features long-needed rehearsal space, as well as the installation of new campus entryway gates designed and crafted by founding Visual Arts Faculty Joseph Thompson.

More 20th anniversary events statewide
A student showcase will be hosted in Hilton Head on November 7, and a celebratory reception will be held in Spartanburg on December 5. In the spring, special events include an anniversary reception in Columbia on March 4, 2020, and a student and alumni showcase at the Peace Center in Greenville on April 7, 2020. Find out more about these upcoming events at https://www.scgsah.org/calendar/events.